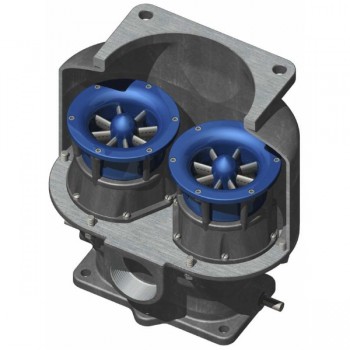 By providing a multitude of fuel inlet vanes and passages evenly dispersed throughout the low-pressure region of the venturi, the fuel is more evenly distributed and providing a more homogenous mixture to the engine.

This upgrade to an older gas engine carburetor can improve mixing and assist with the air/fuel ratio by keeping the mix approximately at a desired rate. It will still be necessary to control and modify the ratio with a AFR controller.

The VMI 600 includes a carefully designed venturi designed specifically to maintain a constant fuel mixture and any load by drawing just the proper amount of fuel for the specific amount of air that is being drawn into the engine.

This will ensure that the ratio of fuel to air is constant and it will make the work of the air fuel controller much easier.

Mechanical carburetors are often designed to run richer as the load increases. The VMI will flatten out the fuel profile so that at any load the mix will still be about the same. By using an insert instead of the stand alone venturi like the VM-350, effort to install the venture in place of the carburetor is minimized.

We recommend using the Continental Controls ECV 5 in conjunction with the VMI-600. This valve can precisely control fuel pressure which is ideal for fuel control along with a venturi.